Created by Olivetti & Oracle Research Lab in Cambridge, United Kingdom in 1999. AT&T squired the lab in 2002, and closed it down. VNC provides a means to see a remote graphical interface (GUI).

The VNC code was released under GPL, and is open source. It has been ported to almost everything, including the Raspberry Pi.

VNC shows a GUI interface, much like remote desktop for Windows, but as mentioned, it is cross platform.

There are GUI based applications which can make it easier to use the Raspberry PI, such as a GUI-based editor like gedit, or any remote machine. VNC allows you to run those GUI applications (inside a VNC window).

An advantage of VNC, is that the GUI window stays persistent between connections. This allows you to set up work, and reconnect later, and pick up where you left off.

Back in the 90s there were many network protocols. Then they all died out except IP, Internet Protocol. And IP became the basis of networking for almost everything since.

But there was a problem with IP, known as early as 1993, there was a limited number of addresses, fewer than the number of people on the planet. So a new version of IP was created, and now there are two versions in play:

An IP address has two parts:

If you want to connect outside of your house/office, then you will need to put in firewall rules to allow incoming connections on TCP port 5900.

With IPv4, you really only need to know the last number of the address since the network part will be the same. Using the example address above, you would connect to the Pi at 192.168.10.11 port 5900 (the VNc port).

With IPv6, it is probably easiest for you to manually assign an easy to remember address like FD01::11, then you would connect with VNC to FD01::11 5900 (the VNC port).
You can assign an ip address with the ip command.

Setting up and starting the VNC Server

But before we can connect, we must install a VNC server application on the Pi, and run it. VNC consists of two parts, the server runs on the Pi, and the client which runs on the screen (Windows, Mac, Linux, BSD, Amiga, Chromebook, Android, iOS) in front of you.

There are multiple servers that have been forked off the original Olivetti & Oracle Research Lab VNC project.

Download the Server and install it. From the Pi command line:

Start the server on the command line:

The server is now running and ready to accept connections from your client.

A word about Unix/Linux/VNC displays

Unix/Linux/VNC have the concept of multiple displays. Think of this as a separate desktop shown to each logged in user. This allows user A to see and use one set of applications, while user B sees their own desktop.

VNC expands on the multiple desktop idea, by creating virtual displays, since users C, D, and E are connecting via the network, each with a unique display.

Displays are numbered from zero, :0, and additional displays follow as :1, :2, and so on. In the example above, the VNC server is creating display :1, because :0 is already being used (by the attached monitor).

Connecting with the Client

The interface is different for each client, but it always asks:

Sometimes the address/hostname and port number are written in a single line:

Because IPv6 addresses use colons to separate the quibbles, the address must be put in braces to separate it from the port number

Before there was VNC, a GUI method for Unix (and then later Linux) was developed by MIT in the mid 80’s. It was called X-Windows. But unlike other windowing systems, X-windows had the capability to separate the application and the display across a network. X-Windows also uses a client/server architecture, but it seems reversed. The screen in front of you (Window, Mac, Linux…) is the server and the application running on the remote machine is the client.

The easiest way to start an X-Windows application is to use ssh to forward the display back to your X server. This is easily done by:
ssh -X remote-host

Or if you on Windows, there is a checkbox in putty which will forward the display back to your windows X server such as xming

The advantage of using X-Windows is that it is reasonably fast, and integrates well into your desktop, showing up as just another window (rather than the whole remote desktop).

The disadvantage is that it is not persistent. When you reconnect (via ssh) your window will be gone.

Problem: desktop is all grey 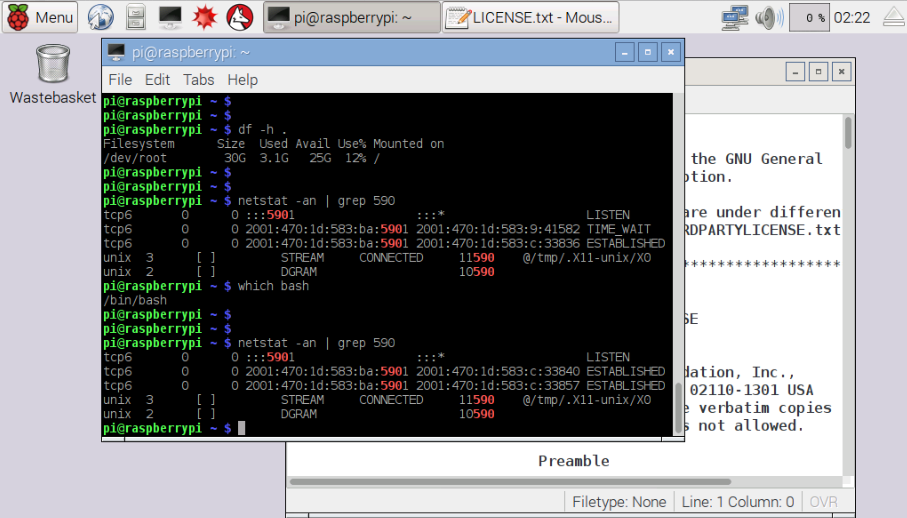